How Parents Can Stop Their Teen Drivers From Speeding?

A teen driver drives an automobile swiftly pass you. You’re surprised how fast, and recklessly the automobile was speeding.

Though the automobile that just passed you wasn’t going 100 miles per hour, its speed was definitely inappropriate. Worse, what happened didn’t occur on a freeway, it took place on a city street.

Like most adults in that situation, you shake your head in bewilderment. It wasn’t the first time that happened, nor will it be the last. And if you’re a parent (with a teen driver) who saw what I just explained, it’s hard not to have the following thought…

If your teen driver drives the automobile faster than you suspect he or she should, you can know when it happens.
More importantly, you can do something effectively to stop it. But let us first get realistic about what you’re dealing with…

Your teen driver doesn’t speed all the time when driving the automobile. On the flip side, here’s a fact that’s also true…
Your teen driver drives above the speed limit more than you already know. Matter-of-fact…

“How your teenager drives when you aren’t looking isn’t the same when your teen driver thinks you are.”

The solution to stop your teen driver from speeding or driving the automobile recklessly is found in a combination of steps you can take.

Together, they lead toward your teen driver handling the automobile in ways you would approve.

So, let me ask some questions for you to answer yourself, and see where we are…

When my sons were new teen drivers, my wife and I assumed our teenagers wouldn’t be foolish taking risks driving I saw other teens take. We judged our new teen driver sons atypical because of the time, and effort we put into their training, as well as how we raised them.

But based on what I read, and learned about teen driver accidents, and fatalities, it was clear teens of all races, ages, socio-economic backgrounds, and sex, had the highest fatality rate driving automobiles.

Finally, after taking a realistic look at what my teen drivers enjoyed watching on television, what they invested their time doing on the computer, and enjoyed playing on video games, my wife and I concluded that our teenagers were typical teens.

That, frankly, is when we changed how we saw our teenagers as young drivers.

We assumed (whether we had evidence or not) that they were vulnerable to mistakes teen drivers made, especially speeding.

From that point forward, we got busy and clamped down hard making sure they did not fall victim to the physical handicap, or tragedy speeding could cause.

As a result, we created a list based on a few assumptions, and based on those assumptions, we came up with some effective ways to cut down, if not eliminate, teen driver speeding.

Here were our assumptions, and the actions we took to deal with them. (I added recommendations now available to parents of teen drivers who speed not available a few years back)…

A lot of what I’m about to share with you is what my wife and I effectively did with our teen drivers to slow their driving.
I’m also going to give you information and resources you can use today, which weren’t available when our teen drivers were new.

The first 18 months after your new teen driver earns a driver’s license is when his or her judgment driving (and speeding) should worry you the most. During that period, a new teen driver’s emotions driving an automobile generally overrules their better, logical judgment.

But what’s new about that? Nothing. Emotions overruling logical judgment play themselves out weekly in a teenager’s life. Whether related, or unrelated to driving an automobile.

A teen driver is an inexperienced driver the first 18 months driving compared with the type of driver he or she will be 3, 5, or 10 years from now.

Why new teen drivers do what they do, I could go on and on… but I’m here to give you solutions how to stop or prevent speeding.

Right before and since creating Drive Home Safe.com, I periodically conducted an informal survey.

Each time an automobile drove swiftly pass me above the posted speed limit, I recorded whether the driver was a teenager. Guess what?

72% of the time the person driving the automobile speeding was a teen driver.

Just like you, worrying about keeping my new driver safe wasn’t enough. I took steps to do something about it.

My reality dealing with new teen drivers operating the automobile faster than they should, struck home soon after my sons passed road tests for their driver’s license.

Like most responsible parents, I didn’t let them loose on the road immediately after they got their licenses. I spent a few weeks supervising their driving.

Of course, I knew the day would come when my teen drivers would want more independence driving cars and trucks.

After an extensive period of supervising their driving, each of my sons (who are twins) told me enough is enough. They felt ready to drive solo.

So, like all parents who turn the keys over to their new teen drivers, I gave them my blessing after I felt that they were ready.

What I hoped wouldn’t happen did…

Within weeks after my new teen drivers were driving solo, I realized they knew enough about driving to be a hazard to themselves (and others).

What does that mean?

As I mentioned earlier, teen drivers with less than 18 months driving are inexperience drivers.They get into situations, and do things operating an automobile outside their range of skill and experience to handle. Speeding, and driving recklessly are two misjudgments new drivers do.

Though I was confident that my new teen drivers could technically drive, I underestimated how much time it realistically took them to gain good on-the-road judgment and experience. I discovered that my sons were heavy footed pedal pushers, very similar to what you may suspect your teen driver having.

To get our arms around the problem, my wife and I did the following:

And, because of what’s available today that wasn’t just a short time ago, I’ve thrown in for you a few up-to-date strategies you can do to keep your teen driver safe. Some of these I hope you’ve already implemented…

For example, we temporarily stripped the car of its stereo system.

These things are remarkable. They can record when the automobile is driven irresponsibly.

Your goal is to stop, or prevent your teen driver from speeding. The best way to do that is for he or she to know that you can tell when the automobile is driven irresponsibly.

(If it bothers you that your teen driver may cry invasion of privacy, get over it and don’t let it stop you. Preventing an automobile accident is what parenting is about. Bottom line, this is not a trust issue, it’s about protecting your teen driver from misjudgments teens too often make when driving).

All of the above implemented together persuades, actually forces, a new teen driver to slow down. They collectively help you overcome the urges in a teen driver to do something unwise and hazardous.

…You worry because the facts speak for themselves…! 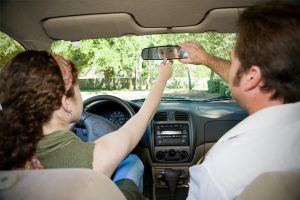